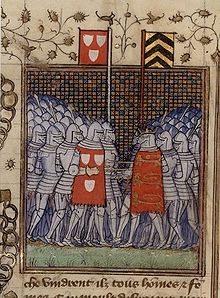 Jeanne de Charney’s true story unfolded against the backdrop of one of the most tumultuous periods of history, 14th century France.  The names of the epic battles – Crécy, Poitiers, Agincourt – still echo down through the centuries.  It was a time of wrenching social and religious change: the beginning of the Black Plague, the dying of chivalry, and the end of the Knights Templar.

Jeanne was overmatched not only by these events, but by the knights and ladies of her own castle, Pierre-Perthuis, in her daunting effort to save it for her only son.  The year after her death, Joan of Arc led the Dauphin to Notre-Dame Cathedral in Reims to be crowned Charles VII.  Although Jeanne could not have known it, the seeds of the Reformation and the French Revolution were clearly being sown during her lifetime.